Innsbruckathlon 2021: Sightseeing with a difference!

Sport, fun and partying in the center of Innsbruck: 1.050 participants let themselves Don't miss this extraordinary event.

At 14:00 p.m. sharp climbing ace and Olympic bronze winner Jakob Schubert the starting signal for the 2nd Innsbruckathlon. Strength, skill, speed and endurance were required to make it to the finish line in the end. Numerous professionals, amateurs and celebrities again took up the challenge on September 4th to take part in the toughest sightseeing tour in Austria - among them the snowboard stars Benjamin Karl, Sabine Schöffmann and Alex Payer as well as double Olympic champion and three-time world champion in the toboggan doubles Andreas lingers

CompanyCode managing director and organizer Andrew Mauerhofer is pleased about the successful event: “After almost two years off from events, it's for my team and I feel all the better to be able to live our passion again: people with to inspire extraordinary events. We never lost sight of our goal accepted the challenges of the last few months - that's why we were involved today happy faces rewarded. We are already looking forward to the finale of the "beat the city" series 2021 in Graz (September 10th + 11.09th)."

Also climbing ace Jakob Schubert is excited: "I'm not so the runner, but the obstacles look so spectacular that it motivates me, next year to be part of this cool event.” Innsbruckathlon winner 2021 shares this opinion Rudy Bruner: "The obstacles are very intense but doable. big Compliments to the organizers – I will probably be a repeat offender.”

More obstacles than ever before

Swing, jump or climb: Along the ten kilometers long running route in the middle of Innsbruck's city center were in total 25 obstacles placed. One of the most spectacular was the brand new Under Armor Bagjump obstacle, where participants had to jump 4,5 meters onto an oversized jumpbag. This obstacle was specially designed for the new series partnership between "beat the city" and the US sports brand Under Armour. But also classics like the "Giga Sport Monkeyland", the "Therese Mölk Bio-Blockade" and the "Raiffeisen Challenge" obstacle as well as the "Tiroler Wand" inspired participants and audience alike.

They made it onto the podium

With an incredible time of 49: 47 minutes gelang is Rudy Bruner be the first to conquer the city. Graduated as the fastest lady Nina Hotter the action-packed obstacle run: she crossed the finish line 01:05:01 hour and thus relegated her colleagues to the ranks with a gap of almost four minutes.

The toughest under the sun contested the ULTRA rating: They completed the Innsbruckathlon twice. A total of two men mastered this athletic test. The first place here could itself Rene Sereinig (2:07:07 hours) to back up.

At the kids’ version of the “beat the city” series that took place the day before – the Tirolis Junior Innsbruckathlon – around 150 children and young people at the age of 8 to 15 years, what is in them: The juniors went through one two kilometers long obstacle course that demanded courage, strength and endurance from them. On the way to the finish they had to 10 exhausting hurdles overcome: Starting with a container filled with mud, through a seven meter long tunnel, to a 3,5 meter high inflatable wall. The focus was on fun and teamwork.

The guests of honor of the 2nd Innsbruckathlon

If you're ambitious, you can still secure an "Early Bird" ticket for the "beat the city" series 2022 until the end of September. These include the Linzathlon (May 21), the E-Grazathlon (June 11) and the Innsbruckathlon (June 25).

Register now for the Innsbruckathlon 2022! 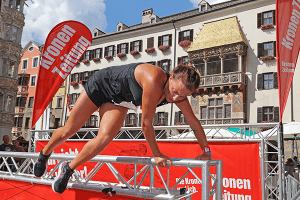 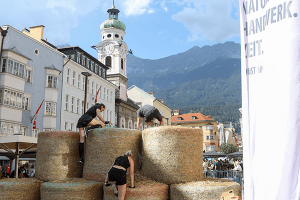 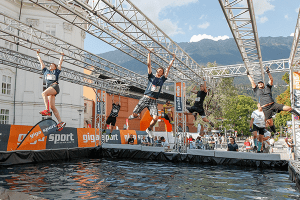 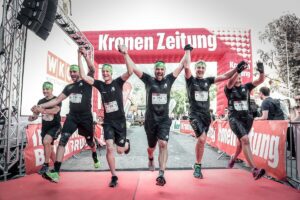 Run faster, celebrate earlier! At beat the city there is now the NEW 5km route. Grab your friends and sign up NOW!

Conquer the short course and celebrate your participation in the party arena immediately afterwards. ;)

HERE you can register for the 5 km route.